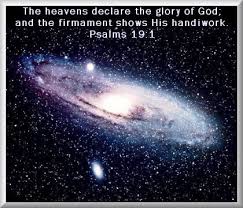 When was the last time you really looked deep into the night sky?

The heavens tell of the glory of God. The skies display his marvelous craftsmanship.

The story is told of a remarkable rabbi named Abraham Heschel. Several years before his death he suffered a massive heart attack, and he was sure he would die. His best friend sat by his side. Rabbi Heschel whispered to his friend, “Sam, I feel only gratitude for my life, for every moment I have lived. I am ready to go. I have seen so many miracles during my lifetime.”

Exhausted, the old rabbi leaned back in his bed to catch his breath. After a long pause, he said, “Sam, never once in my life did I ask God for success or wisdom or power or fame. I asked for wonder, and he gave it to me.”

Everything about God and creation screams out thoughts of wonder and amazement. Any person who can stand before it and yawn is either dead and buried or might as well be. With God, boredom is not an option. King David cried out to God in song, “I look at the night sky and see the work of your fingers—the moon and the stars you have set in place…the birds in the sky, the fish in the sea, and everything that swims the ocean currents. O Lord, our Lord, the majesty of your name fills the earth!” (Psalm 8:3; 8-9)

I’m one who believes there are no atheists in the world, only stubborn insubordinates. God’s creation is his greatest evangelist. How sad that we so seldom stop to acknowledge its wonder.

Saint Augustine taught that God created the world out of nothing. Creation was something like the magician pulling a rabbit out of hat. Except God didn’t have a rabbit and He didn’t have a hat.
R C SPROUL

8Â During those days another large crowd gathered. Since they had nothing to eat, Jesus called his disciples to him and said, 2Â â€œI have compassion for these people; they have already been with me three days and have nothing to eat. 3Â If I send them home hungry, they will collapse on the way, because some of them have come a long distance.â€

4Â His disciples answered, â€œBut where in this remote place can anyone get enough bread to feed them?â€

5Â â€œHow many loaves do you have?â€ Jesus asked.

6Â He told the crowd to sit down on the ground. When he had taken the seven loaves and given thanks, he broke them and gave them to his disciples to distribute to the people, and they did so. 7Â They had a few small fish as well; he gave thanks for them also and told the disciples to distribute them. 8Â The people ate and were satisfied. Afterward the disciples picked up seven basketfuls of broken pieces that were left over. 9Â About four thousand were present. After he had sent them away, 10Â he got into the boat with his disciples and went to the region of Dalmanutha.

11Â The Pharisees came and began to question Jesus. To test him, they asked him for a sign from heaven. 12Â He sighed deeply and said, â€œWhy does this generation ask for a sign? Truly I tell you, no sign will be given to it.â€ 13Â Then he left them, got back into the boat and crossed to the other side.

The Yeast of the Pharisees and Herod

14Â The disciples had forgotten to bring bread, except for one loaf they had with them in the boat. 15Â â€œBe careful,â€ Jesus warned them. â€œWatch out for the yeast of the Pharisees and that of Herod.â€

16Â They discussed this with one another and said, â€œIt is because we have no bread.â€

17Â Aware of their discussion, Jesus asked them: â€œWhy are you talking about having no bread? Do you still not see or understand? Are your hearts hardened? 18Â Do you have eyes but fail to see, and ears but fail to hear? And donâ€™t you remember? 19Â When I broke the five loaves for the five thousand, how many basketfuls of pieces did you pick up?â€

20Â â€œAnd when I broke the seven loaves for the four thousand, how many basketfuls of pieces did you pick up?â€

21Â He said to them, â€œDo you still not understand?â€

22Â They came to Bethsaida, and some people brought a blind man and begged Jesus to touch him. 23Â He took the blind man by the hand and led him outside the village. When he had spit on the manâ€™s eyes and put his hands on him, Jesus asked, â€œDo you see anything?â€

24Â He looked up and said, â€œI see people; they look like trees walking around.â€

25Â Once more Jesus put his hands on the manâ€™s eyes. Then his eyes were opened, his sight was restored, and he saw everything clearly. 26Â Jesus sent him home, saying, â€œDonâ€™t even go into the village.â€

Peter Declares That Jesus Is the Messiah

27Â Jesus and his disciples went on to the villages around Caesarea Philippi. On the way he asked them, â€œWho do people say I am?â€

28Â They replied, â€œSome say John the Baptist; others say Elijah; and still others, one of the prophets.â€

Peter answered, â€œYou are the Messiah.â€

30Â Jesus warned them not to tell anyone about him.

31Â He then began to teach them that the Son of Man must suffer many things and be rejected by the elders, the chief priests and the teachers of the law, and that he must be killed and after three days rise again. 32Â He spoke plainly about this, and Peter took him aside and began to rebuke him.

33Â But when Jesus turned and looked at his disciples, he rebuked Peter. â€œGet behind me, Satan!â€ he said. â€œYou do not have in mind the concerns of God, but merely human concerns.â€

The Way of the Cross

34Â Then he called the crowd to him along with his disciples and said: â€œWhoever wants to be my disciple must deny themselves and take up their cross and follow me. 35Â For whoever wants to save their life will lose it, but whoever loses their life for me and for the gospel will save it. 36Â What good is it for someone to gain the whole world, yet forfeit their soul? 37Â Or what can anyone give in exchange for their soul? 38Â If anyone is ashamed of me and my words in this adulterous and sinful generation, the Son of Man will be ashamed of them when he comes in his Fatherâ€™s glory with the holy angels.â€