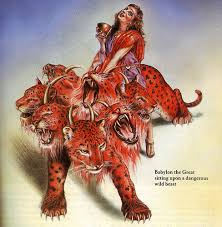 How have our spiritual ancestors suffered?

Another beast…ordered the people of the world to make a great statue of the first beast, who was fatally wounded and then came back to life. He was permitted to give life to this statue so that it could speak. Then the statue commanded that anyone refusing to worship it must die.

When Diocletian became emperor of the Roman Empire in 284, Christians were encouraged because of rumors that his wife and daughter were believers. And, in fact, during the first nineteen years of his reign, Christians lived in relative peace and prosperity.

On February 23, 303, the day of the Roman feat Terminalia, an edict was posted that ordered all copies of Scripture to be burned, all churches destroyed, their property confiscated, and Christian worship forbidden. The Great Persecution had begun.

In early 304 another edict insisted that everyone in the Roman Empire sacrifice to the Roman gods. Every Christian was in jeopardy. Finally, the years of the Great Persecution ended with an edict of toleration by Constantine in 313. It granted religion liberty to Christians and pagans alike.

“…we decree still further in regard to the Christians, that their places, in which they were formerly accustomed to assemble…shall be restored to the said Christians, without demanding money or any other equivalent, with no delay or hesitation… For by this means… the divine favor toward us which we have already experienced in many matters will continue sure through all time.”

adapted from The One Year® Book of Christian History by E. Michael and Sharon Rusten, Tyndale House Publishers (2003), pp 108-9