16Â When the Sabbath was over, Mary Magdalene, Mary the mother of James, and Salome bought spices so that they might go to anoint Jesusâ€™ body. 2Â Very early on the first day of the week, just after sunrise, they were on their way to the tomb 3Â and they asked each other, â€œWho will roll the stone away from the entrance of the tomb?â€

4Â But when they looked up, they saw that the stone, which was very large, had been rolled away. 5Â As they entered the tomb, they saw a young man dressed in a white robe sitting on the right side, and they were alarmed.

6Â â€œDonâ€™t be alarmed,â€ he said. â€œYou are looking for Jesus the Nazarene, who was crucified. He has risen! He is not here. See the place where they laid him. 7Â But go, tell his disciples and Peter, â€˜He is going ahead of you into Galilee. There you will see him, just as he told you.â€™â€

8Â Trembling and bewildered, the women went out and fled from the tomb. They said nothing to anyone, because they were afraid.

[The earliest manuscripts and some other ancient witnesses do not have verses 9â€“20.]

9Â When Jesus rose early on the first day of the week, he appeared first to Mary Magdalene, out of whom he had driven seven demons. 10Â She went and told those who had been with him and who were mourning and weeping. 11Â When they heard that Jesus was alive and that she had seen him, they did not believe it.

12Â Afterward Jesus appeared in a different form to two of them while they were walking in the country. 13Â These returned and reported it to the rest; but they did not believe them either.

14Â Later Jesus appeared to the Eleven as they were eating; he rebuked them for their lack of faith and their stubborn refusal to believe those who had seen him after he had risen.

15Â He said to them, â€œGo into all the world and preach the gospel to all creation. 16Â Whoever believes and is baptized will be saved, but whoever does not believe will be condemned. 17Â And these signs will accompany those who believe: In my name they will drive out demons; they will speak in new tongues; 18Â they will pick up snakes with their hands; and when they drink deadly poison, it will not hurt them at all; they will place their hands on sick people, and they will get well.â€

19Â After the Lord Jesus had spoken to them, he was taken up into heaven and he sat at the right hand of God. 20Â Then the disciples went out and preached everywhere, and the Lord worked with them and confirmed his word by the signs that accompanied it. 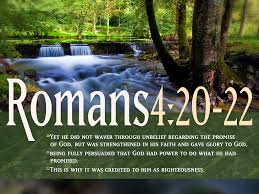 Christian, take good care of thy faith; for recollect faith is the only way whereby thou canst obtain blessings. If we want blessings from God, nothing can fetch them down but faith. Prayer cannot draw down answers from God’s throne except it be the earnest prayer of the man who believes. Faith is the angelic messenger between the soul and the Lord Jesus in glory. Let that angel be withdrawn, we can neither send up prayer, nor receive the answers. Faith is the telegraphic wire which links earth and heaven–on which God’s messages of love fly so fast, that before we call he answers, and while we are yet speaking he hears us. But if that telegraphic wire of faith be snapped, how can we receive the promise? Am I in trouble?–I can obtain help for trouble by faith. Am I beaten about by the enemy?–my soul on her dear Refuge leans by faith. But take faith away–in vain I call to God. There is no road betwixt my soul and heaven. In the deepest wintertime faith is a road on which the horses of prayer may travel–aye, and all the better for the biting frost; but blockade the road, and how can we communicate with the Great King? Faith links me with divinity. Faith clothes me with the power of God. Faith engages on my side the omnipotence of Jehovah. Faith ensures every attribute of God in my defence. It helps me to defy the hosts of hell. It makes me march triumphant over the necks of my enemies. But without faith how can I receive anything of the Lord? Let not him that wavereth–who is like a wave of the Sea–expect that he will receive anything of God! O, then, Christian, watch well thy faith; for with it thou canst win all things, however poor thou art, but without it thou canst obtain nothing. “If thou canst believe, all things are possible to him that believeth.” 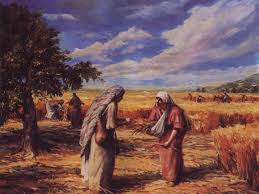 Whenever we are privileged to eat of the bread which Jesus gives, we are, like Ruth, satisfied with the full and sweet repast. When Jesus is the host, no guest goes empty from the table. Our head is satisfied with the precious truth which Christ reveals; our heart is content with Jesus, as the altogether lovely object of affection; our hope is satisfied, for whom have we in heaven but Jesus? and our desire is satiated, for what can we wish for more than “to know Christ and to be found in him?” Jesus fills our conscience till it is at perfect peace; our judgment with persuasion of the certainty of his teachings; our memory with recollections of what he has done, and our imagination with the prospects of what he is yet to do. As Ruth was “sufficed, and left,” so is it with us. We have had deep draughts; we have thought that we could take in all of Christ; but when we have done our best we have had to leave a vast remainder. We have sat at the table of the Lord’s love, and said, “Nothing but the infinite can ever satisfy me; I am such a great sinner that I must have infinite merit to wash my sin away;” but we have had our sin removed, and found that there was merit to spare; we have had our hunger relieved at the feast of sacred love, and found that there was a redundance of spiritual meat remaining. There are certain sweet things in the Word of God which we have not enjoyed yet, and which we are obliged to leave for awhile; for we are like the disciples to whom Jesus said, “I have yet many things to say unto you, but ye cannot bear them now.” Yes, there are graces to which we have not attained; places of fellowship nearer to Christ which we have not reached; and heights of communion which our feet have not climbed. At every banquet of love there are many baskets of fragments left. Let us magnify the liberality of our glorious Boaz.

5 thoughts on “HE IS RISEN AND HE IS SOON COMING”