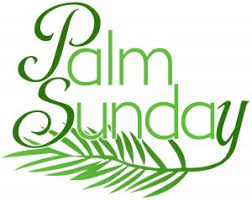 The next day, the news that Jesus was on the way to Jerusalem swept through the city. A huge crowd of Passover visitors took palm branches and went down the road to meet him.

From Olivet they followed mid an exultant crowd the victor palm branch waving, and chanting clear and loud; the Lord of men and angels rode on in lowly state, nor scorned that little children should on His bidding wait.

Today is Palm Sunday. The triumphal entry into Jerusalem was the scene of a curious exchange between Jesus and the religious leaders of the day. A crowd was following Jesus, waving palms and singing, “Hosanna!” This term, literally meaning, “Lord, save us!” was also a cry of praise.

This crowd included a number of children, no doubt caught up in the excitement of the day. The leaders asked Jesus to tell the children to stop such singing. Certainly Jesus wouldn’t want innocent kids to be guilty of blasphemy. “Do you hear what these children are saying?” they asked Jesus.

Yes, Jesus said, quoting Psalm 8:2, “From the lips of children and infants you have ordained praise.” (Matthew 21:16)

You might think that Jeannette Threlfall had many reasons not to praise God. Orphaned young, shuttled among relatives, she was injured in an accident and became an invalid. Yet she remained cheery and faithful, penning many Christian poems and hymns. Her life was a cry of hosanna! to her victorious Savior.

Our Holy Week readings are adapted from The One Year® Book of Hymns by Mark Norton and Robert Brown, Tyndale House Publishers (1995). Today’s is taken from the entry for March 31.