Christ is our Redeemer 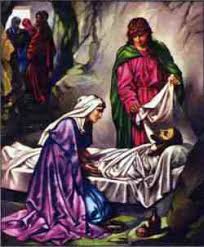 As his body was taken away, the women from Galilee followed and saw the tomb where they placed his body. Then they went home and prepared spices and ointments to embalm him. But by the time they were finished it was the Sabbath, so they rested all that day as required by the law.

Were You There? Traditional spiritual

This favorite hymn comes from the rich American spiritual tradition, probably developed in the early 1800s by African-American slaves. As in most spirituals, the words are simple, seizing on one central theme or concept.

Spirituals tend to have a lot of emotional appeal. As a result, this hymn, like few others, puts the singer there. We experience the “tremble” as we sing it. And in the triumphant final stanza, we experience the glory of a risen Lord. We are called out of the cold analysis of Christ’s death, burial, and resurrection into the moment of living it. We are called out of the theological debate and into the stark reality. We hear the nails pounded into the cross, we see the onlookers wagging their heads, we smell the burial spices, and we feel the rumble of the stone rolling away. And we tremble… tremble… tremble.

Our Holy Week readings are adapted from The One Year® Book of Hymns by Mark Norton and Robert Brown, Tyndale House Publishers (1995). Today’s is taken from the entry for March 21.

14 thoughts on “CHRIST OUR REMEEMER”