The song of triumph has begun

For sin is the sting that results in death, and the law gives sin its power. How we thank God, who gives us victory over sin and death through Jesus Christ our Lord!

The strife is o’er — the battle done, the victory of life is won; the song of triumph has begun: Alleluia!

The three sad days have quickly sped, He rises glorious from the dead; all glory to our risen Head! Alleluia!

God exercised His power on our behalf

Note the pattern of this hymn: negative undone, positive done, our response. In each triad we see first the forces of evil that tried to conquer Christ but were beaten. Then we see a more positive expression of what has occurred. Christ had won, He rises, He opens heaven and frees slaves. Finally, we respond with songs and shouts of joy: Alleluia!

The richness of the text was matched by the majesty of the music, written by the sixteenth-century composer Giovanni de Palestrina. He was a devout Roman Catholic who created many wonderful sacred works still used in churches and secular settings. This tune was adapted from a “Gloria Patri” in one of his choral works. It first appeared with Francis Pott’s translation of this Latin text in 1861.

The Bible describes the work of Christ in many different ways, and the Christian writers through the ages have elaborated on all these ideas. God exercised His power on our behalf when He raised Christ from the dead. Death has no ultimate power over us because we are risen with Christ. Alleluia!

Our “Resurrection Week” readings are adapted from The One Year® Book of Hymns by Mark Norton and Robert Brown, Tyndale House Publishers (1995). Today’s is taken from the entry for April 10.

Up from the Grave He Arose! 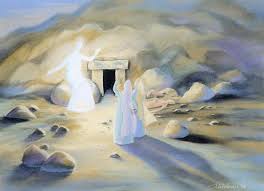 God released him from the horrors of death and raised him back to life again, for death could not keep him in its grip.

Death cannot keep his prey, Jesus my Savior! He tore the bars away, Jesus my Lord!

Up from the grave He arose, with a mighty triumph o’re His foes; He arose a Victor from the dark domain, and He lives forever with His saints to reign, He arose! He arose! Hallelujah! Christ arose!

It’s hard to match this hymn for sheer drama. The first stanza begins dismally, then strikes a note of hope, and then the chorus explodes with joy. The music itself comes rising up from the depths and celebrates on high.

Robert Lowry wrote both the words and music to this hymn in 1874. At the time, he was professor of literature at Bucknell University in Pennsylvania and pastor of a nearby church. He had written other hymn tunes and texts as he practiced his passion for poetry and song. “Sometimes the music comes and the words follow,” he explained once. “I watch my moods, and when anything strikes me, whether words or music, no matter where I am, at home, on the street, I jot it down. My brain is sort of a spinning machine, for there is music running through it all the time.”

Our “Resurrection Week” readings are adapted from The One Year® Book of Hymns by Mark Norton and Robert Brown, Tyndale House Publishers (1995). Today’s is taken from the entry for April 9.