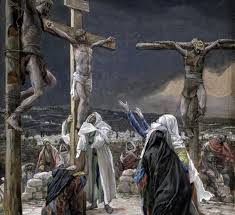 He had been all night in agony, he had spent the early morning at the hall of Caiaphas, he had been hurried from Caiaphas to Pilate, from Pilate to Herod, and from Herod back again to Pilate; he had, therefore, but little strength left, and yet neither refreshment nor rest were permitted him. They were eager for his blood, and therefore led him out to die, loaded with the cross. O dolorous procession! Well may Salem’s daughters weep. My soul, do thou weep also.

What learn we here as we see our blessed Lord led forth? Do we not perceive that truth which was set forth in shadow by the scapegoat? Did not the high-priest bring the scapegoat, and put both his hands upon its head, confessing the sins of the people, that thus those sins might be laid upon the goat, and cease from the people? Then the goat was led away by a fit man into the wilderness, and it carried away the sins of the people, so that if they were sought for they could not be found. Now we see Jesus brought before the priests and rulers, who pronounce him guilty; God himself imputes our sins to him, “the Lord hath laid on him the iniquity of us all;” “He was made sin for us;” and, as the substitute for our guilt, bearing our sin upon his shoulders, represented by the cross; we see the great Scapegoat led away by the appointed officers of justice. Beloved, can you feel assured that he carried your sin? As you look at the cross upon his shoulders, does it represent your sin? There is one way by which you can tell whether he carried your sin or not. Have you laid your hand upon his head, confessed your sin, and trusted in him? Then your sin lies not on you; it has all been transferred by blessed imputation to Christ, and he bears it on his shoulder as a load heavier than the cross.

Let not the picture vanish till you have rejoiced in your own deliverance, and adored the loving Redeemer upon whom your iniquities were laid.

“All we like sheep have gone astray; we have turned every one to his own way; and the Lord hath laid on him the iniquity of us all.”

Here a confession of sin common to all the elect people of God. They have all fallen, and therefore, in common chorus, they all say, from the first who entered heaven to the last who shall enter there, “All we like sheep have gone astray.” The confession, while thus unanimous, is also special and particular: “We have turned every one to his own way.” There is a peculiar sinfulness about every one of the individuals; all are sinful, but each one with some special aggravation not found in his fellow. It is the mark of genuine repentance that while it naturally associates itself with other penitents, it also takes up a position of loneliness. “We have turned every one to his own way,” is a confession that each man had sinned against light peculiar to himself, or sinned with an aggravation which he could not perceive in others. This confession is unreserved; there is not a word to detract from its force, nor a syllable by way of excuse. The confession is a giving up of all pleas of self-righteousness. It is the declaration of men who are consciously guilty–guilty with aggravations, guilty without excuse: they stand with their weapons of rebellion broken in pieces, and cry, “All we like sheep have gone astray; we have turned every one to his own way.” Yet we hear no dolorous wailings attending this confession of sin; for the next sentence makes it almost a song. “The Lord hath laid on him the iniquity of us all.” It is the most grievous sentence of the three, but it overflows with comfort. Strange is it that where misery was concentrated mercy reigned; where sorrow reached her climax weary souls find rest. The Saviour bruised is the healing of bruised hearts. See how the lowliest penitence gives place to assured confidence through simply gazing at Christ on the cross!

Romans 13:8 –
“[Love Fulfills the Law] Let no debt remain outstanding, except the continuing debt to love one another, for whoever loves others has fulfilled the law.”

6Â Then he told this parable: â€œA man had a fig tree growing in his vineyard, and he went to look for fruit on it but did not find any. 7Â So he said to the man who took care of the vineyard, â€˜For three years now Iâ€™ve been coming to look for fruit on this fig tree and havenâ€™t found any. Cut it down! Why should it use up the soil?â€™

Jesus Heals a Crippled Woman on the Sabbath

10Â On a Sabbath Jesus was teaching in one of the synagogues, 11Â and a woman was there who had been crippled by a spirit for eighteen years. She was bent over and could not straighten up at all. 12Â When Jesus saw her, he called her forward and said to her, â€œWoman, you are set free from your infirmity.â€ 13Â Then he put his hands on her, and immediately she straightened up and praised God.

15Â The Lord answered him, â€œYou hypocrites! Doesnâ€™t each of you on the Sabbath untie your ox or donkey from the stall and lead it out to give it water? 16Â Then should not this woman, a daughter of Abraham, whom Satan has kept bound for eighteen long years, be set free on the Sabbath day from what bound her?â€

17Â When he said this, all his opponents were humiliated, but the people were delighted with all the wonderful things he was doing.

The Parables of the Mustard Seed and the Yeast

18Â Then Jesus asked, â€œWhat is the kingdom of God like? What shall I compare it to? 19Â It is like a mustard seed, which a man took and planted in his garden. It grew and became a tree, and the birds perched in its branches.â€

20Â Again he asked, â€œWhat shall I compare the kingdom of God to? 21Â It is like yeast that a woman took and mixed into about sixty pounds of flour until it worked all through the dough.â€

22Â Then Jesus went through the towns and villages, teaching as he made his way to Jerusalem.