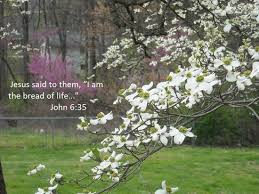 31 Meanwhile his disciples urged him, Rabbi, eat something.

32 But he said to them, I have food to eat that you know nothing about

33 Then his disciples said to each other, Could someone have brought him food?

34 My food, said Jesus, is to do the will of him who sent me and to finish his work.

35 Don’t you have a saying, It’s still four months until harvest? I tell you, open your eyes and look at the fields! They are ripe for harvest.

36 Even now the one who reaps draws a wage and harvests a crop for eternal life, so that the sower and the reaper may be glad together.

37 Thus the saying One sows and another reaps is true.

38 I sent you to reap what you have not worked for. Others have done the hard work, and you have reaped the benefits of their labor.

39 Many of the Samaritans from that town believed in him because of the woman’s testimony, He told me everything I ever did.

 40 So when the Samaritans came to him, they urged him to stay with them, and he stayed two days.

41 And because of his words many more became believers.

42 They said to the woman, We no longer believe just because of what you said; now we have heard for ourselves, and we know that this man really is the Savior of the world.

43 After the two days he left for Galilee.

44 (Now Jesus himself had pointed out that a prophet has no honor in his own country.)

45 When he arrived in Galilee, the Galileans welcomed him. They had seen all that he had done in Jerusalem at the Passover Festival, for they also had been there.

46Â Once more he visited Cana in Galilee, where he had turned the water into wine. And there was a certain royal official whose son lay sick at Capernaum. 47Â When this man heard that Jesus had arrived in Galilee from Judea, he went to him and begged him to come and heal his son, who was close to death.

48 Unless you people see signs and wonders Jesus told him,You will never believe.

49 The royal official said, â€œSir, come down before my child dies.â€

The man took Jesus at his word and departed.

51 While he was still on the way, his servants met him with the news that his boy was living.

52 When he inquired as to the time when his son got better, they said to him, Yesterday, at one in the afternoon, the fever left him.

53 Then the father realized that this was the exact time at which Jesus had said to him, Your son will live. So he and his whole household believed.

54 This was the second sign Jesus performed after coming from Judea to Galilee.