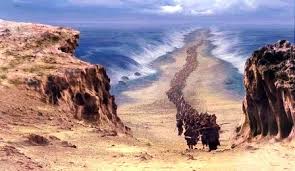 After the Hebrews leave Egypt, Pharaoh changes his mind and pursues the Israelites, who are soon trapped between the oncoming Egyptians and the Red Sea.

As Pharaoh approached, the people of Israel looked up and panicked when they saw the Egyptians overtaking them. They cried out to the Lord, and they said to Moses, Why did you bring us out here to die in the wilderness? Weren’t there enough graves for us in Egypt? What have you done to us? Why did you make us leave Egypt? Didn’t we tell you this would happen while we were still in Egypt? We said, Leave us alone! Let us be slaves to the Egyptians. It’s better to be a slave in Egypt than a corpse in the wilderness!

But Moses told the people, Don’t be afraid. Just stand still and watch the Lord rescue you today. The Egyptians you see today will never be seen again. The Lord himself will fight for you. Just stay calm.â€ (Exodus 14:10-14)

Trapped against the sea, the Israelites faced the Egyptian army sweeping in for the kill. The people thought they were doomed. After watching God‘s powerful hand deliver them from Egypt, they still could only respond with fear, whining, and despair. Where was their trust in God? Israel had to learn from repeated experience that God was able to provide for them. The people were hostile and despairing, but Moses encouraged them to watch the wonderful way God would rescue them. When it looked as if they were trapped, Moses called upon God to intervene.

This is the first instance of grumbling and complaining by the Israelites. Their lack of faith in God is startling. Yet we often do the same, complaining over inconveniences or discomforts. The Israelites were about to learn some tough lessons. Had they trusted God, they would have been spared much grief.

God preserved these examples in the Bible so that we can learn to trust him the first time. By focusing on God’s faithfulness in the past we can face crises with confidence rather than with fear and complaining.

You may not be chased by an army, but you may still feel trapped. Instead of giving in to despair, adopt Moses attitude:  Just stand still and watch the Lord rescue you today.

2 thoughts on “Pharaoh or Taskmasters, God Is Always In Control”