“So Mephibosheth dwelt in Jerusalem: for he did eat continually at the king’s table; and was lame on both his feet.”
2 Samuel 9:13

Mephibosheth was no great ornament to a royal table, yet he had a continual place at David’s board, because the king could see in his face the features of the beloved Jonathan. Like Mephibosheth, we may cry unto the King of Glory, “What is thy servant, that thou shouldst look upon such a dead dog as I am?” but still the Lord indulges us with most familiar intercourse with himself, because he sees in our countenances the remembrance of his dearly-beloved Jesus. The Lord’s people are dear for another’s sake. Such is the love which the Father bears to his only begotten, that for his sake he raises his lowly brethren from poverty and banishment, to courtly companionship, noble rank, and royal provision. Their deformity shall not rob them of their privileges. Lameness is no bar to sonship; the cripple is as much the heir as if he could run like Asahel. Our right does not limp, though our might may. A king’s table is a noble hiding-place for lame legs, and at the gospel feast we learn to glory in infirmities, because the power of Christ resteth upon us. Yet grievous disability may mar the persons of the best-loved saints. Here is one feasted by David, and yet so lame in both his feet that he could not go up with the king when he fled from the city, and was therefore maligned and injured by his servant Ziba. Saints whose faith is weak, and whose knowledge is slender, are great losers; they are exposed to many enemies, and cannot follow the king whithersoever he goeth. This disease frequently arises from falls. Bad nursing in their spiritual infancy often causes converts to fall into a despondency from which they never recover, and sin in other cases brings broken bones. Lord, help the lame to leap like an hart, and satisfy all thy people with the bread of thy table! 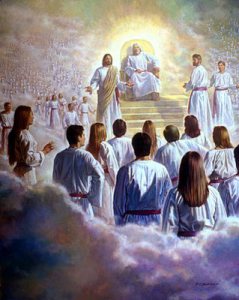 “What is thy servant, that thou shouldest look upon such a dead dog as I am?”
2 Samuel 9:8

If Mephibosheth was thus humbled by David’s kindness, what shall we be in the presence of our gracious Lord? The more grace we have, the less we shall think of ourselves, for grace, like light, reveals our impurity. Eminent saints have scarcely known to what to compare themselves, their sense of unworthiness has been so clear and keen. “I am,” says holy Rutherford, “a dry and withered branch, a piece of dead carcass, dry bones, and not able to step over a straw.” In another place he writes, “Except as to open outbreakings, I want nothing of what Judas and Cain had.” The meanest objects in nature appear to the humbled mind to have a preference above itself, because they have never contracted sin: a dog may be greedy, fierce, or filthy, but it has no conscience to violate, no Holy Spirit to resist. A dog may be a worthless animal, and yet by a little kindness it is soon won to love its master, and is faithful unto death; but we forget the goodness of the Lord, and follow not at his call. The term “dead dog” is the most expressive of all terms of contempt, but it is none too strong to express the self- abhorrence of instructed believers. They do not affect mock modesty, they mean what they say, they have weighed themselves in the balances of the sanctuary, and found out the vanity of their nature. At best, we are but clay, animated dust, mere walking hillocks; but viewed as sinners, we are monsters indeed. Let it be published in heaven as a wonder, that the Lord Jesus should set his heart’s love upon such as we are. Dust and ashes though we be, we must and will “magnify the exceeding greatness of his grace.” Could not his heart find rest in heaven? Must he needs come to these tents of Kedar for a spouse, and choose a bride upon whom the sun had looked? O heavens and earth, break forth into a song, and give all glory to our sweet Lord Jesus.