John 7:37 (KJV)
37 In the last day, that great day of the feast, Jesus stood and cried, saying, If any man thirst, let him come unto me, and drink.

Christ has grace without measure in himself, but he hath not retained it for himself. As the reservoir empties itself into the pipes, so hath Christ emptied out his grace for his people. “Of his fulness have all we received, and grace for grace.” He seems only to have in order to dispense to us. He stands like the fountain, always flowing, but only running in order to supply the empty pitchers and the thirsty lips which draw nigh unto it. Like a tree, he bears sweet fruit, not to hang on boughs, but to be gathered by those who need. Grace, whether its work be to pardon, to cleanse, to preserve, to strengthen, to enlighten, to quicken, or to restore, is ever to be had from him freely and without price; nor is there one form of the work of grace which he has not bestowed upon his people. As the blood of the body, though flowing from the heart, belongs equally to every member, so the influences of grace are the inheritance of every saint united to the Lamb; and herein there is a sweet communion between Christ and his Church, inasmuch as they both receive the same grace. Christ is the head upon which the oil is first poured; but the same oil runs to the very skirts of the garments, so that the meanest saint has an unction of the same costly moisture as that which fell upon the head. This is true communion when the sap of grace flows from the stem to the branch, and when it is perceived that the stem itself is sustained by the very nourishment which feeds the branch. As we day by day receive grace from Jesus, and more constantly recognize it as coming from him, we shall behold him in communion with us, and enjoy the felicity of communion with him. Let us make daily use of our riches, and ever repair to him as to our own Lord in covenant, taking from him the supply of all we need with as much boldness as men take money from their own purse. 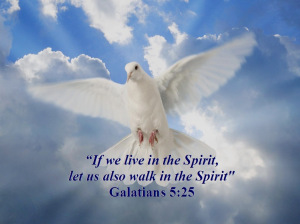 This is no unusual occurrence; it is the general rule of the moral universe that those men prosper who do their work with all their hearts, while those are almost certain to fail who go to their labour leaving half their hearts behind them. God does not give harvests to idle men except harvests of thistles, nor is he pleased to send wealth to those who will not dig in the field to find its hid treasure. It is universally confessed that if a man would prosper, he must be diligent in business. It is the same in religion as it is in other things. If you would prosper in your work for Jesus, let it be heart work, and let it be done with all your heart. Put as much force, energy, heartiness, and earnestness into religion as ever you do into business, for it deserves far more. The Holy Spirit helps our infirmities, but he does not encourage our idleness; he loves active believers. Who are the most useful men in the Christian church? The men who do what they undertake for God with all their hearts. Who are the most successful Sabbath-school teachers? The most talented? No; the most zealous; the men whose hearts are on fire, those are the men who see their Lord riding forth prosperously in the majesty of his salvation. Whole-heartedness shows itself in perseverance; there may be failure at first, but the earnest worker will say, “It is the Lord’s work, and it must be done; my Lord has bidden me do it, and in his strength I will accomplish it.” Christian, art thou thus “with all thine heart” serving thy Master? Remember the earnestness of Jesus! Think what heart-work was his! He could say, “The zeal of thine house hath eaten me up.” When he sweat great drops of blood, it was no light burden he had to carry upon those blessed shoulders; and when he poured out his heart, it was no weak effort he was making for the salvation of his people. Was Jesus in earnest, and are we lukewarm?

2 thoughts on “His Fullness”