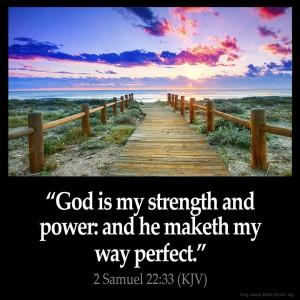 Jesus is the federal head of his elect. As in Adam, every heir of flesh and blood has a personal interest, because he is the covenant head and representative of the race as considered under the law of works; so under the law of grace, every redeemed soul is one with the Lord from heaven, since he is the Second Adam, the Sponsor and Substitute of the elect in the new covenant of love. The apostle Paul declares that Levi was in the loins of Abraham when Melchizedek met him: it is a certain truth that the believer was in the loins of Jesus Christ, the Mediator, when in old eternity the covenant settlements of grace were decreed, ratified, and made sure forever. Thus, whatever Christ hath done, he hath wrought for the whole body of his Church. We were crucified in him and buried with him (read Col. 2:10-13), and to make it still more wonderful, we are risen with him and even ascended with him to the seats on high (Eph. 2:6). It is thus that the Church has fulfilled the law, and is “accepted in the beloved.” It is thus that she is regarded with complacency by the just Jehovah, for he views her in Jesus, and does not look upon her as separate from her covenant head. As the Anointed Redeemer of Israel, Christ Jesus has nothing distinct from his Church, but all that he has he holds for her. Adam’s righteousness was ours so long as he maintained it, and his sin was ours the moment that he committed it; and in the same manner, all that the Second Adam is or does, is ours as well as his, seeing that he is our representative. Here is the foundation of the covenant of grace. This gracious system of representation and substitution, which moved Justin Martyr to cry out, “O blessed change, O sweet permutation!” this is the very groundwork of the gospel of our salvation, and is to be received with strong faith and rapturous joy.

The Lord Jesus is in the midst of his church; he walketh among the golden candlesticks; his promise is, “Lo, I am with you alway.” He is as surely with us now as he was with the disciples at the lake, when they saw coals of fire, and fish laid thereon and bread. Not carnally, but still in real truth, Jesus is with us. And a blessed truth it is, for where Jesus is, love becomes inflamed. Of all the things in the world that can set the heart burning, there is nothing like the presence of Jesus! A glimpse of him so overcomes us, that we are ready to say, “Turn away thine eyes from me, for they have overcome me.” Even the smell of the aloes, and the myrrh, and the cassia, which drop from his perfumed garments, causes the sick and the faint to grow strong. Let there be but a moment’s leaning of the head upon that gracious bosom, and a reception of his divine love into our poor cold hearts, and we are cold no longer, but glow like seraphs, equal to every labour, and capable of every suffering. If we know that Jesus is with us, every power will be developed, and every grace will be strengthened, and we shall cast ourselves into the Lord’s service with heart, and soul, and strength; therefore is the presence of Christ to be desired above all things. His presence will be most realized by those who are most like him. If you desire to see Christ, you must grow in conformity to him. Bring yourself, by the power of the Spirit, into union with Christ’s desires, and motives, and plans of action, and you are likely to be favoured with his company. Remember his presence may be had. His promise is as true as ever. He delights to be with us. If he doth not come, it is because we hinder him by our indifference. He will reveal himself to our earnest prayers, and graciously suffer himself to be detained by our entreaties, and by our tears, for these are the golden chains which bind Jesus to his people.