“Opening and alleging, that Christ must needs have suffered, and risen again from the dead; and that this Jesus, whom I preach unto you, is Christ.”

An angel had come from heaven with such force that it caused an earthquake, and that angel rolled the stone away.

2. And, behold, there was a great earthquake: for the angel of the Lord descended from heaven, and came and rolled back the stone from the door, and sat upon it.

3. His countenance was like lightning, and his raiment white as snow:

When the women saw this angel they were frightened.

5. And the angel answered and said unto the women, Fear not ye: for I know that ye seek Jesus, which was crucified.

6. He is not here: for he is risen, as he said. Come, see the place where the Lord lay. 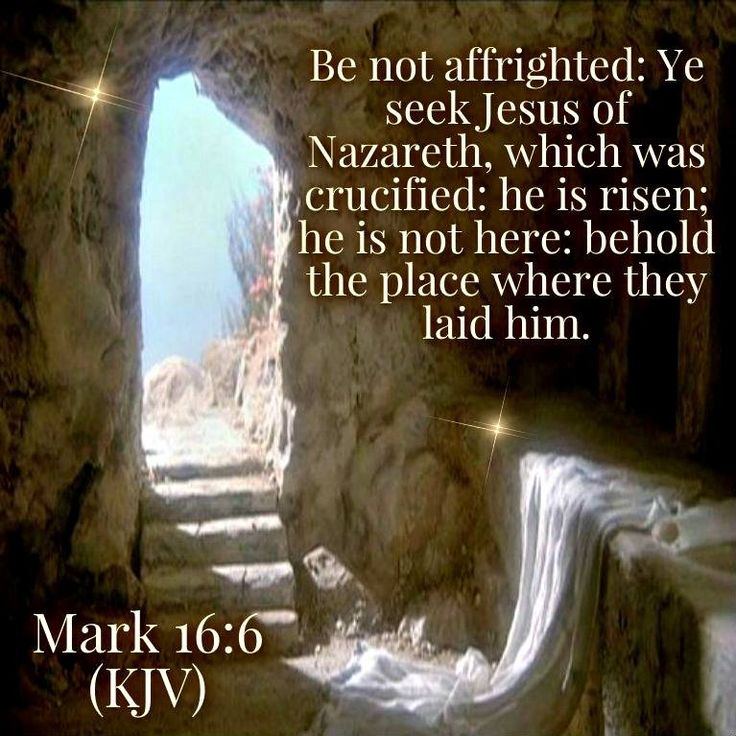 1. And when the sabbath was past, Mary Magdalene, and Mary the mother of James, and Salome, had bought sweet spices, that they might come and anoint him.

2. And very early in the morning the first day of the week, they came unto the sepulchre at the rising of the sun.

3. And they said among themselves, Who shall roll us away the stone from the door of the sepulchre?

4. And when they looked, they saw that the stone was rolled away: for it was very great.

Doing away with death

“In that day he will remove the cloud of gloom, the shadow of death that hangs over the earth. He will swallow up death forever! The Sovereign Lord will wipe away all tears. He will remove forever all insults and mockery against his land and people. The Lord has spoken!”   Isaiah 25:7-8

There are many rooms in my Father’s home, and I am going to prepare a place for you. If this were not so, I would tell you plainly.  John 14:2

Jesus told her, “I am the resurrection and the life. Those who believe in me, even though they die like everyone else, will live again.”  John 11:25

“There are two kinds of death — the cessation of life here on earth, and the missed opportunity to live in heaven with God forever. To die physically is to leave our earthly body and our place in the earthly community. To die spiritually, eternally, is to miss eternal residence in heaven with God and his people, to be separated from God forever.

When we die physically, we can be even more alive as we take up residence in God’s eternal home with him and his people. It is not pleasant to think of dying physically. But it is devastating to think of missing heaven forever.”

For more on this week’s topic, check these resources:

John 20:17(KJV)
17 Jesus saith unto her, Touch me not; for I am not yet ascended to my Father: but go to my brethren, and say unto them, I ascend unto my Father, and your Father; and to my God, and your God.

Now when Jesus was risen early the first day of the week, he appeared first to Mary Magdalene, out of whom he had cast seven devils

He said, Go tell my brethren; and away she went to tell others that she had found the Saviour. If you have the privilege of seeing Christ, do not eat the morsel behind the door. Have you found honey? Taste it yourself, but go and tell others. You cannot have seen much of the Saviour, unless you desire to let others see him. Your piety is a mere sham if it does not lead to practical service. Are there not some Mary Magdalenes here who have had seven devils cast out of them? You have felt the power of divine grace in your heart; you love the Saviour; you long for communion with him. My dear sister, as soon as you have fellowship, do not be afraid to speak to others what the Lord shall say in private to you. We do not want women to enter the pulpit; that is a violation both of grace and nature, and as much an offence to good manners as it is to God’s own law; but you have your own sphere, you have your own place of work, you can gather your own sex about you, also your children; you have many opportunities; tell others that Jesus has risen, that there is a risen life; that you know it, and that you pant and long that others too should rise from the grave of sin to the new life in Jesus.

As for you, men and brethren, to whom it pertains more particularly to be teachers and pastors, I charge you, whatsoever you have found within the circle of fire where the closest communion is, whatsoever Christ has revealed to you in hours of retirement when you have come nearest to him, tell it to his family, feed his flock with it.

The whole system of Christianity rests upon the fact that “Christ is risen from the dead;” for, “If Christ be not risen, then is our preaching vain, and your faith is also vain: ye are yet in your sins.” The divinity of Christ finds its surest proof in his resurrection, since he was “Declared to be the Son of God with power, according to the spirit of holiness, by the resurrection from the dead.” It would not be unreasonable to doubt his deity if he had not risen. Moreover, Christ’s sovereignty depends upon his resurrection, “For to this end Christ both died, and rose, and revived, that he might be Lord both of the dead and living.” Again, our justification, that choice blessing of the covenant, is linked with Christ’s triumphant victory over death and the grave; for “He was delivered for our offences, and was raised again for our justification.” Nay, more, our very regeneration is connected with his resurrection, for we are “Begotten again unto a lively hope by the resurrection of Jesus Christ from the dead.” And most certainly our ultimate resurrection rests here, for, “If the Spirit of him that raised up Jesus from the dead dwell in you, he that raised up Christ from the dead shall also quicken your mortal bodies by his Spirit that dwelleth in you.” If Christ be not risen, then shall we not rise; but if he be risen then they who are asleep in Christ have not perished, but in their flesh shall surely behold their God. Thus, the silver thread of resurrection runs through all the believer’s blessings, from his regeneration onwards to his eternal glory, and binds them together. How important then will this glorious fact be in his estimation, and how will he rejoice that beyond a doubt it is established, that “now is Christ risen from the dead”!

For God has raised his Son.”

“The only begotten of the Father, full of grace and truth.”
John 1:14

Believer, you can bear your testimony that Christ is the only begotten of the Father, as well as the first begotten from the dead. You can say, “He is divine to me, if he be human to all the world beside. He has done that for me which none but a God could do. He has subdued my stubborn will, melted a heart of adamant, opened gates of brass, and snapped bars of iron. He hath turned for me my mourning into laughter, and my desolation into joy; he hath led my captivity captive, and made my heart rejoice with joy unspeakable and full of glory. Let others think as they will of him, to me he must be the only begotten of the Father: blessed be his name. And he is full of grace. Ah! had he not been, I should never have been saved. He drew me when I struggled to escape from his grace; and when at last I came all trembling like a condemned culprit to his mercy-seat, he said, Thy sins which are many are all forgiven thee: be of good cheer.’ And he is full of truth. True have his promises been, not one has failed. I bear witness that never servant had such a master as I have; never brother such a kinsman as he has been to me; never spouse such a husband as Christ has been to my soul; never sinner a better Saviour; never mourner a better comforter than Christ hath been to my spirit. I want none beside him. In life he is my life, and in death he shall be the death of death; in poverty Christ is my riches; in sickness he makes my bed; in darkness he is my star, and in brightness he is my sun; he is the manna of the camp in the wilderness, and he shall be the new corn of the host when they come to Canaan. Jesus is to me all grace and no wrath, all truth and no falsehood: and of truth and grace he is full, infinitely full. My soul, this night, bless with all thy might the only Begotten.’